At the beginning of 2015 the first of my Szalóky Take Down recurve bow was finished. Even up until then I had the luck of competing with really good inventory, I managed to bring several successful bow maker’s creations to the podium.
This bow opened new horizons for me as its shape, stability and punctuality is extraordinary. Apart from this, I could participate  in any international competition, because along with the precise manufacturing (which I had the opportunity to see with my own eyes) I also received a spare bow, therefore I was more than secured.
I had high expectations towards this gear. Between 2015 and 2018 it proved itself on several world and european competitions, as well as on national ones. Even after thousands of shots we were unable to find any micro tears or other injury or twist. 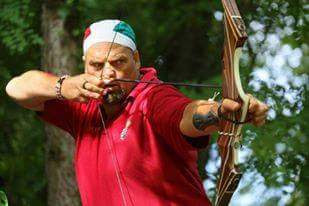 Parameters of the Bow:

Take Down, it’s strength is 46# on 28”, the brace height is 22,2 cm, the limbs were made with custom layering ( layered both in length and width, which makes them homogenous). The wedge shaped lamination running down the limbs’ geometric midline is there not only for aesthetic purposes, but helps greatly with tuning.

Yet, I am only going to write shortly about this bow. Although it helped me to a big number of successes, for example two 3D WA world champion golds (which I consider the peak of my career), as well as several IAA world and European championship golds and several national titles.
Today the bow hangs on the wall of the bow maker’s living room, in great condition, propagating the amplitude of my regards and friendship.

2018 – due to my urging a new, modified, model was made, the elongated twin of the previous one. With no less expectations than to outstrip it’s ancestors’s incredible performance.

It appears well-proportionedly long (68”), but still profuse. It’s colour aesthetically varies between mid-brown, black and white. Joint fittings are made from precisely elaborated and acid-proof stainless steel. The whole bow turns from one curve to the other, there is no straight line in it that would disturb the eternal stream  that is connected by the string at the two ends of the limbs. This intricate shape associates to a cobra in a strained pose.
The handle is made of rosewood and rosewood ???, together with white bakelite where the two woods meet for stiffening  according to my personal request, which emphasizes the curves. I agreed on using rosewood by trusting the creator’s craftsmanship, as more beautiful types of wood exist, but for the sake of the gluing technology, therefore for the sake of durability, damping vibrations this is the best raw material

The grip was made for my hand, elongated at the pivot point, narrow ovoidal cross sectioned, with a shelf made for the thumb. Specifically with back tacked grip for the high pressure point.
The shape of the limbs isn’t ordinary either. Because of the angle of the limbs and the riser, the mounted side of the limb is already curved, then it continues in a slight bend and it ends in a steep, prestressed precurve.
There we find a layered nock that harmonises with the colour of the bow. The material of the limbs is layered pickled maple, all of them laminated in both width and length. The manufacturer created solid limbs that I can swap out without needing to tune again. This is a huge advance in case of an incident during a competition, when there isn’t time for adjusting the bow. (Luckily, I only had to test this at home, but it worked fine.) 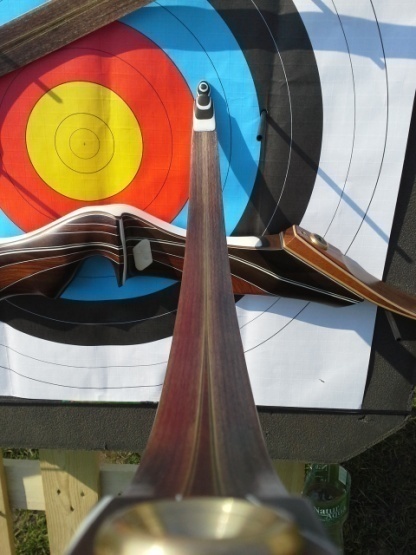 When holding the bow, there’s no sense of lacking something as the grip was adjusted to my palm, therefore it sits snug, which feature is further established with the bow’s length and weight. The draw of the string is even, you can feel the tension on the first few inches already, but it doesn’t cause problems at 30 inches either. After releasing the bow moves vertically forward, the upper arm doesn’t fall toward the archer. This was achieved by carving out a big sight window from the elongated riser which made the upper limb lighter than the lower. This plays a big role in achieving calm, exact and encored shots. The weight and stiffness of the riser absorbs the vibrations. The brace height is 23,2 cm which I tried to lower, but the bow protested, it became uptight, therefore I accepted it’s will.
Since the beginning I have used Lightspeed 500 arrows, there sure is better than them, but for me in price-value ratio they are unsurpassable. I protect these arrows against hits by bushing them, I cut them to 28,5”. I usually change the fletching (I am experimenting), but I always put foil under them. The points are 65g screws (insert weight not included)

I didn’t leave this topic as the last one for nothing, as I know that 70% of our archers get the most excited about this topic. I only think this is relevant up until a certain level, around 45”- 50” it should reach 225 feet/sec, which is enough for 3D competitions. But I measured the speed and I was surprised as the increase of the bow’s length should have caused the loss of speed, but I was mistaken. There is a difference between one speed detector and the other, therefore I cannot give exact data, but measured at the same time, with the same device, compared to other companies’ recurve bows, I can valiantly say that the bow is really fast.

To Whom I Recommend It

To all archers who would like to compete with a certified, tested and heavy-duty instrument.
Also, to someone who has high goals in this category, as I wouldn’t be keeping a F1 racing car either if it was only serving looks and collecting dust in the garage. Other than that I recommend this bow to people with at least a 28 inch draw. (In case of shorter draws I recommend the shorter models.)

It is important to keep in mind that I described my very own bow, which is a first series model with extras on it. It was made specifically according to my requirements. Naturally, a test model was made before mine, which absolutely persuaded me, and my bow was made based on it. When ordering, based on the standard model and by liaising with István Szalóky, it is possible to customize the bow’s colour, the extras that go on it and the grip can be fitted to hand. The possibilities are almost infinite. I wish you good luck and confident racing with this wonderful bow. 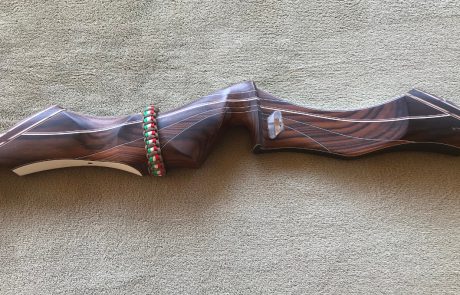 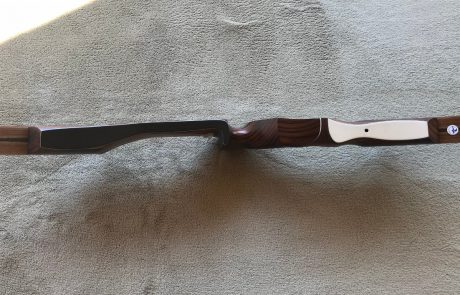